It was something I grew up doing and absolutely loved.  I always looked forward to the summer time because it meant my family and I whipped out our bikes and headed to the park for a long day of riding.  Many years later, the excitement and joy still rang true.

Last summer, my husband bought me a new bicycle and I couldn’t wait to ride it (I really couldn’t).  As soon as we walked out of the store with it I turned to him and said, “Can you drive home… alone?  I’m going to ride my bike and meet you there!”  And, so, that’s what we did: 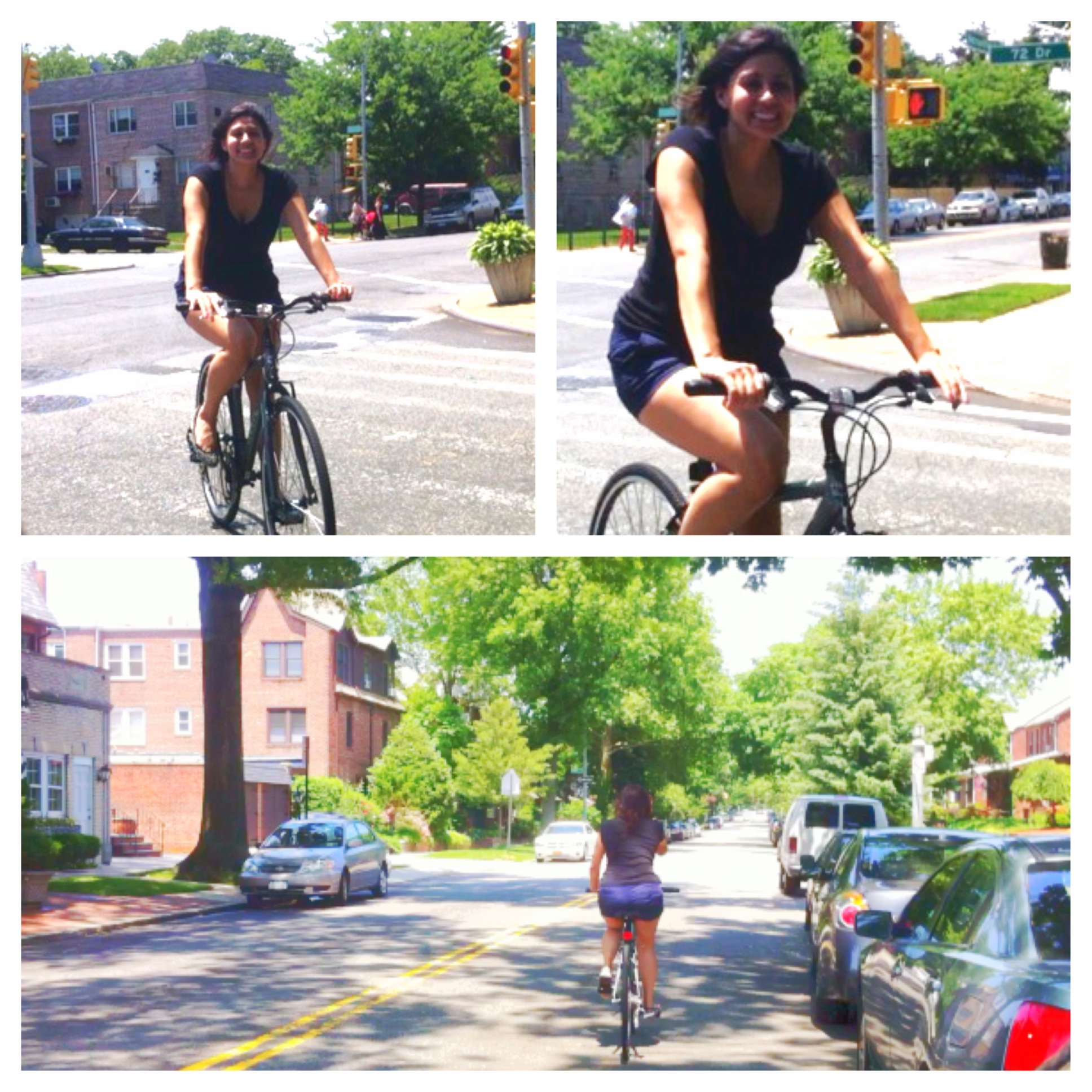 I was so happy that day; it was the perfect way to kick off the summer.  I then thought about it when I got home and thought, “Hm, I can ride my bike during the summer to the train station during the work week; what a great way to be active!  But, first, I need a helmet for that!”  So we went back to the store and bought a helmet – I even got a little mirror, too! 🙂 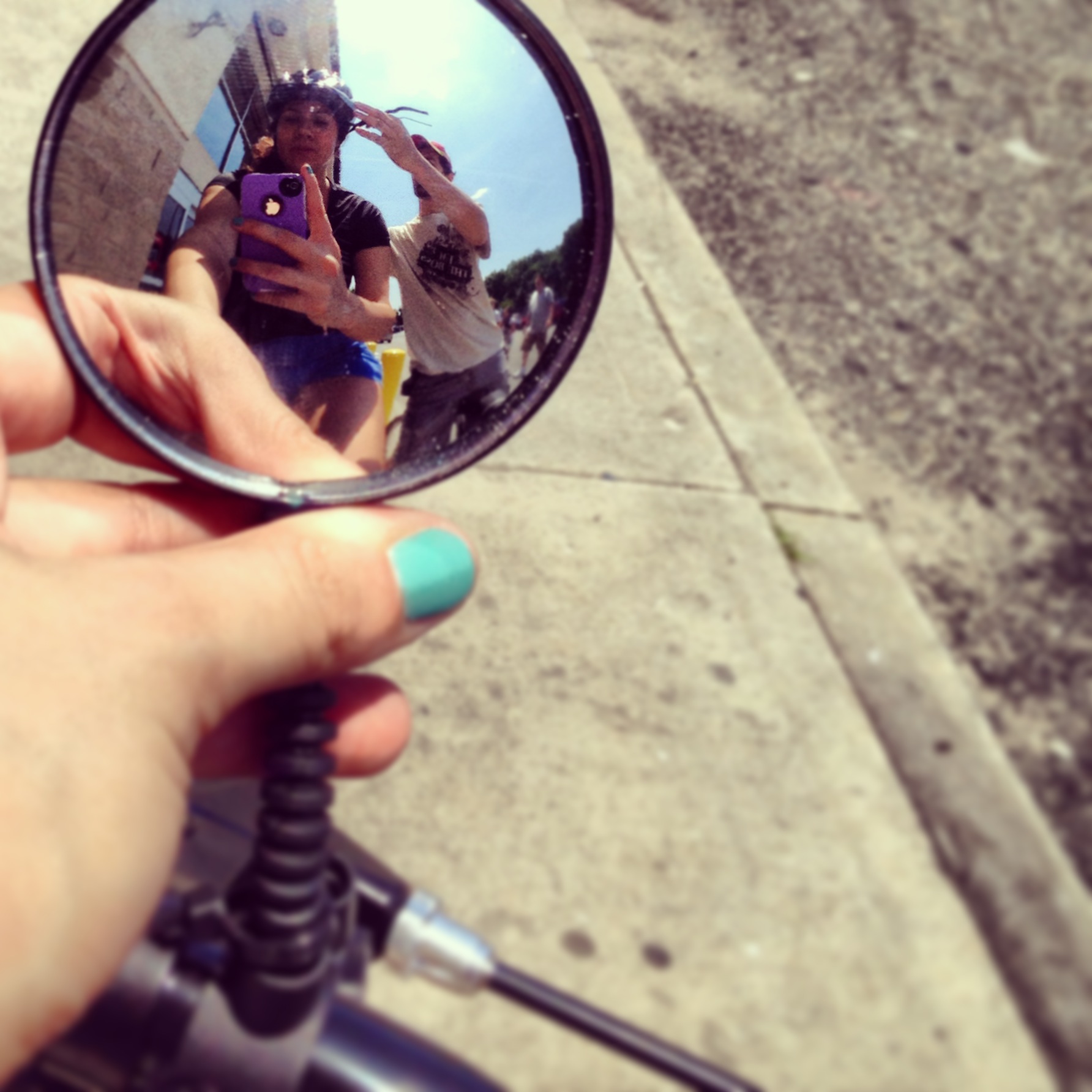 When the weekend was over, I did as I said I would and took my bicycle out and decided to ride it to my train to get to work.  So I hopped on and went on my merry way.

As I started peddling along the right side of the street (being as cautious as possible), I noticed that there was a car that came from behind me and went into my mini ‘bike lane’.  It was about 40 feet straight ahead of me and then it started to make a right turn into a parking garage.  Figuring it would keep going, I kept peddling.  I timed myself well (I was a long-time rider, after all!).  But I was wrong. So wrong.

The driver decided to stop his car (now perpendicular to me) with its butt sticking out into my lane and the other half on the sidewalk.  I needed to either slow down or change lanes.  So I looked into my mirror and tried to see if I could merge into oncoming traffic for just a little bit.  But there it was, a yellow school bus, coming too close to me at a velocity that didn’t fit into my calculations.  So I freaked and panicked.  Knowing that I was either going to (a) get hit by a bus or (b) crash into the butt of the SUV that was trying to get into the parking garage, I did what I knew best: STOP.  I reached for my breaks, but being in such a panic mode, I undoubtedly made a big mistake: I hit the front brake instead of the back and, you guessed it, I went flying. 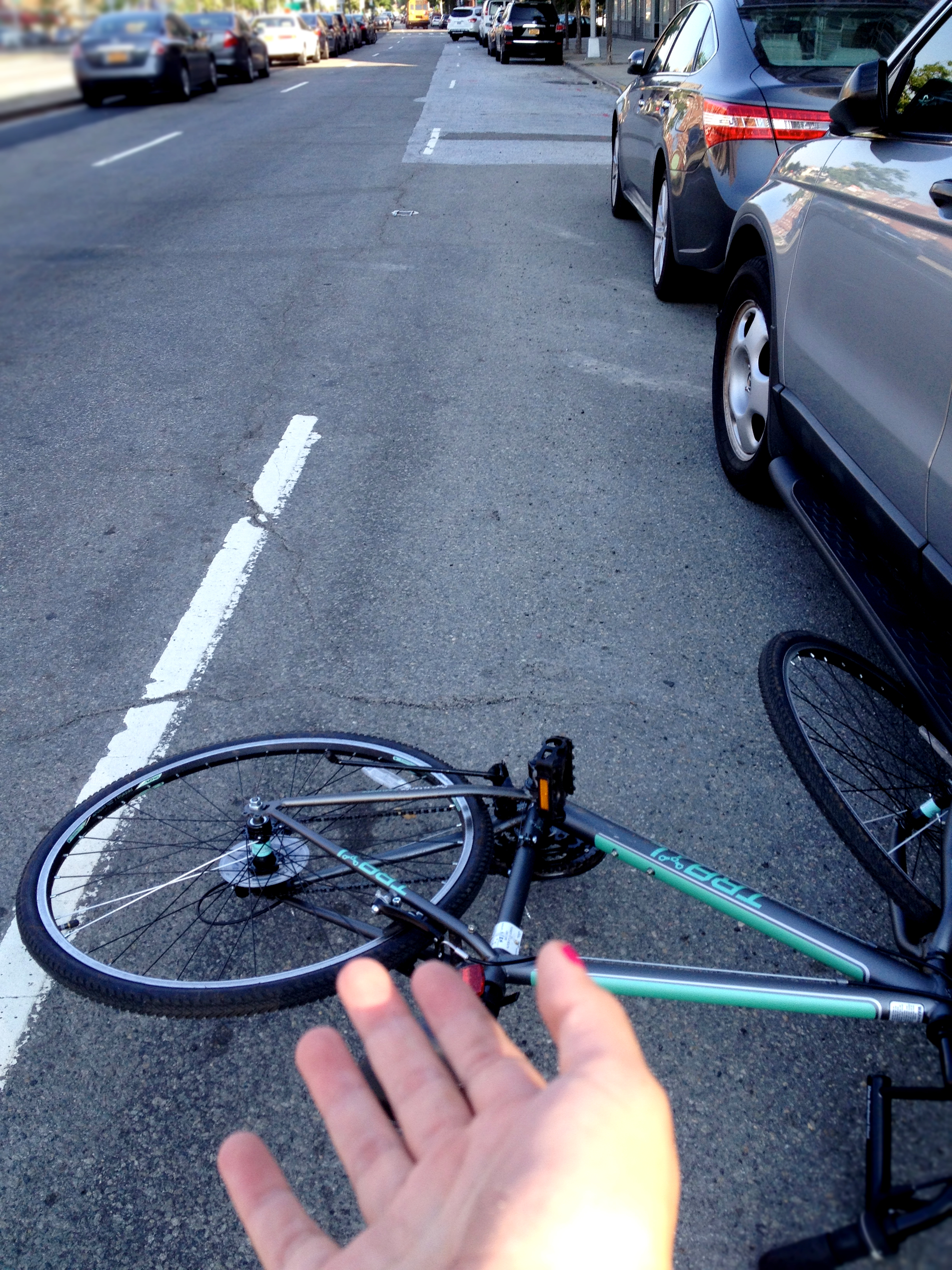 My bicycle flipped under a car and I was flipped in the air.  I thank God that I had on my helmet (SO IMPORTANT!) because my head hit that concrete floor three times.. bang, bang, bang.  I felt dizzy, my palms were scraped and bleeding, and I was waiting for someone to come to my aide.  But wouldn’t you know it, no one saw what happened.  Not the random pedestrian walking by, not the car pulling into the garage, nor the bus that zipped on by.  I was SO scared and just SO grateful that I didn’t get run over by a random passing car or anything.  I immediately got up and snapped the above picture with my phone.  I sent it to my boss and team in a text message and said “Guys, I will be in late.  Just had a bike accident. See you soon!”

And wouldn’t you know it, I got up (limping and all), walked my bike to the train, got on the train, and headed to work.

I didn’t think much of the fall.  I tried to play it off like it was nothing, like I was stronger than it.  I called my husband soon after it happened, crying just a little, and he urged me to go back home, but I didn’t.  I wanted to be seen in the best light from the views of others: I wanted to be a strong girl.

A few days later I started to notice my legs and, yup, they were a little bruised and boy were my legs so sore from the impact: 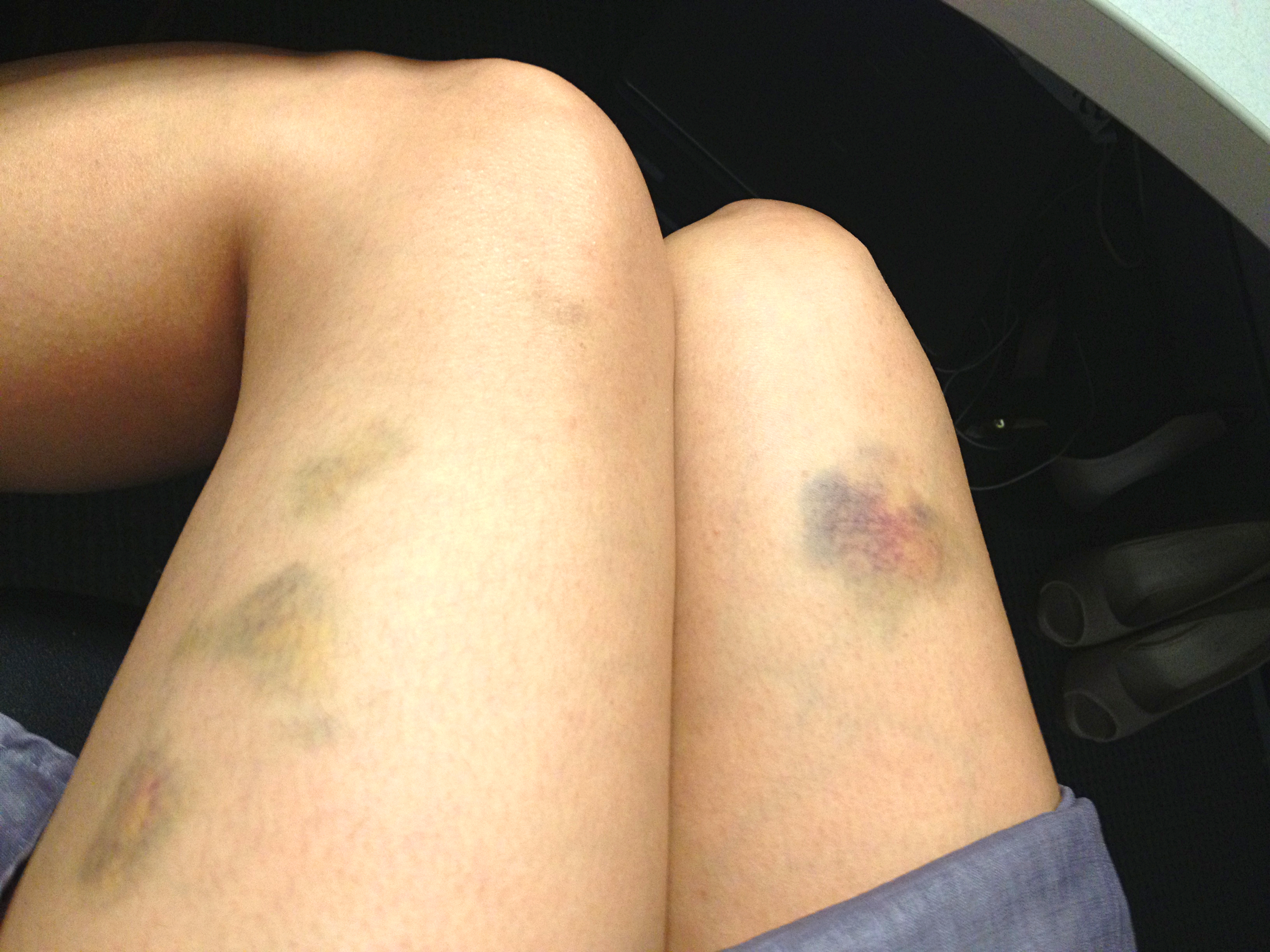 But, I was still ‘strong’; I didn’t show weakness to others. It was more of “Check out my bruises!  Cool, huh?!” than anything else.

To others I was ‘strong’, but deep inside, I was weak.  No one was there to console me when the accident happened.  I didn’t know what to do.  I worried about having a concussion or having fractured something.  All I knew was that I didn’t want to get back up on that bike.

And I didn’t.  I spent a year letting it collect dust and I was OK with that, because I didn’t want anymore accidents.  I wanted to be ‘safe’.

This was three weeks before my giant panic attack last year.  Who would have known…

Getting Back On
With all of the hard work I have been putting in within the last year to control my anxiety and just let it go, I finally started to feel stronger.  So, the other day, I went into the storage room, looked at my bike, wiped off the dust, took it off the rack and told my husband, “Let’s go to the park… for a bike ride.”

When it was finally time for me to get on that bike, I broke down.  I was so afraid.  I didn’t want an accident.  I didn’t want to relive the pain.  Because I do think that me falling off the bike and how that whole situation went down gave some fire to me panicking on the train last year, because it was, yet again, something I was suppressing.  It was something I needed to just say “okay, move on with life, it’s over.” But it wasn’t.

I would ride the bike for a few spins of the wheel and then I would stop, freeze, and cry.  It was too much for me.  Not to mention that I forgot my helmet.  I just felt so susceptible and prone to another accident.  I didn’t know how to keep my balance, I would fall off trying to make a simple turn, and I just kept envisioning myself flipping forward, because that’s exactly how I got off of it last time: I flew and tumbled forward in the air.

My husband took the phone and captured my struggle: 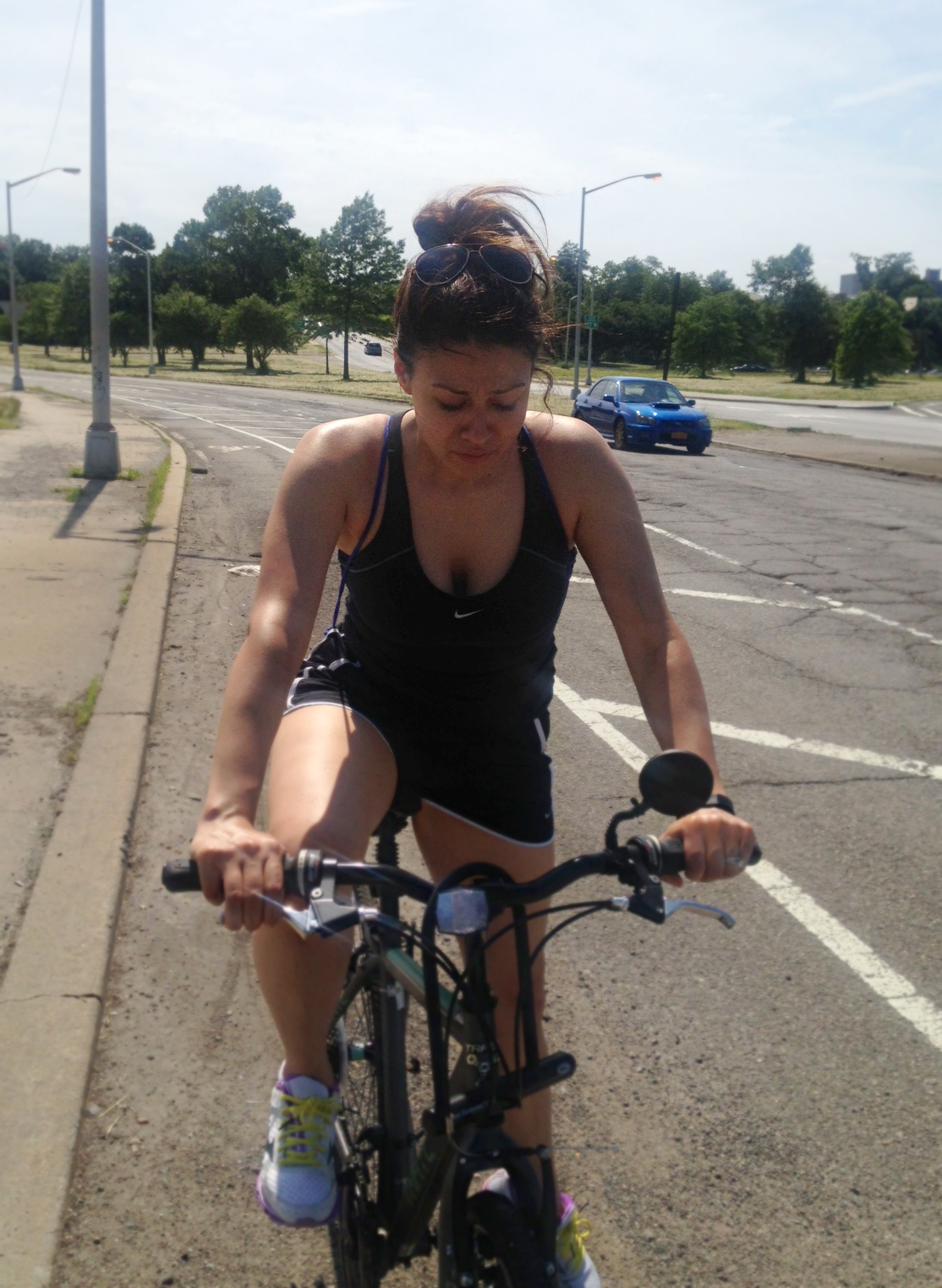 It’s a picture that I am both not proud and, yet, proud of at the same time.  I’m not proud because it’s not exactly the most flattering picture I have and it’s a time of my weakness. But, I’m proud of it because here I am, at one of my weakest points, and I’m sharing it. And I’m doing so because I want to share that struggles do exist and they could be anything to anyone.  And you know what? Pushing through this moment was absolutely not what I imagined.  I didn’t want to cry.  I didn’t want to freeze.  But I did.  I listened to my mind and in order to grow, it was telling me to just let the feelings go.

It was me, no one else, that took the initiative to rebuild my confidence in riding a bike at this point.  I felt ready after a year.  It was my idea to go out and try it.  It was my time to do this for myself.

And wouldn’t you know it?  I had such a great time after jumping over the anxiety hurdles.  I rode that bike like I used to when I was a kid.  I mean, yes, I was still a little hesitant, but I grew confident and started to enjoy every moment of it again.

Moral of the Story
Yes, you may fall off of a bike or fail at something somewhere at sometime.  But the important thing to do is to make sure that you take care of yourself, first and foremost.  Don’t try to pretend to be something you aren’t for others.  Make sure that you give yourself forgiveness and remind yourself that you aren’t perfect, that you may fail, but that it’s part of being human.  Just remember that when you do fall, give yourself time.  Don’t rush.  And if it takes a year for you to ‘get back up on that horse’ (or bicycle, in my case), then so what?  Let it be.  Only you know when you’re ready.  Don’t let others force you.  And if you face a moment of déjà-vu, know that no two times in life are ever the same.  You are always are given the chance to do different, to lead different, to act different. 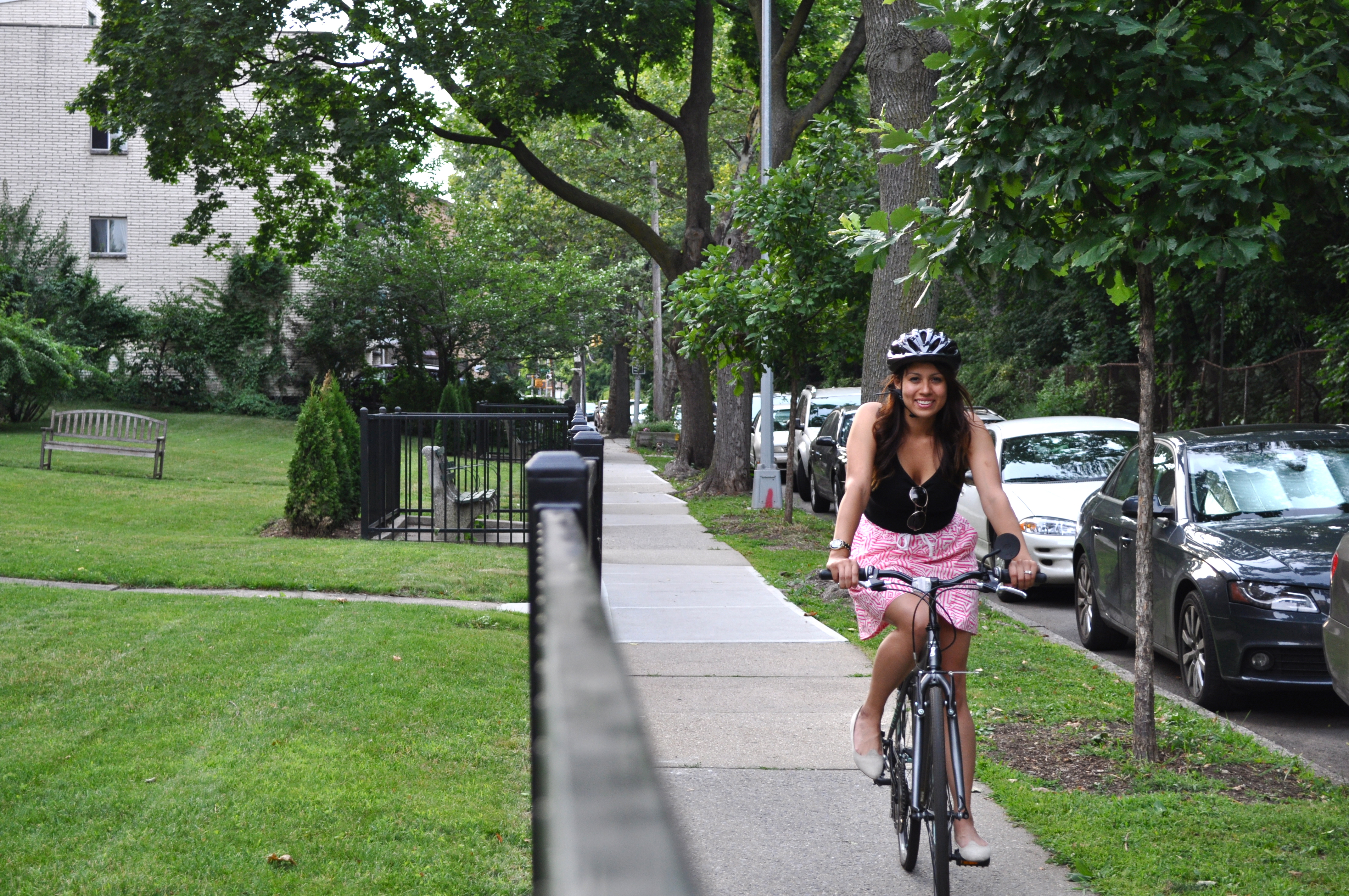 3 Fears I Conquered at the Beach

One Year Since Anxiety Struck & What I Have Learned