Before my giant anxiety attack last summer, I never regarded yoga as something valuable. I respected the people that did it, but chuckled inside at how serious they took it (I know, how mature of me). While bending in different positions seemed like an awesome skill to have, I wasn’t interested in yoga.  I didn’t see any benefit in doing it.  It just wasn’t my thing.

After my husband and I got married and finished moving into our new apartment, there was already so much stress that I had been under and was suppressing.  There was that whole wedding thing which, like many brides out there, wanted it to be perfect.  Everyone was going to be talking about this and that.  So, naturally, I would stress out, scream out loud, and cry so much until I figured out what would make everyone enjoy our wedding and make them happy.  Next, there was that moving-in-and-living-together-for-the-first-time-ever thing (that was also stressful).  The whole toilet seat argument?  Yeah, it happened.  For a week.  And all of this was just the tip of the iceberg at the time (January 2013).

I did nothing about all of this negative energy inside of me and just let it marinate, like a tomato sauce over low heat on the stove; however, my husband saw how sad and unhappy I was and suggested I try the yoga studio down the block.  I refused so many times but finally, to make him happy, decided to try it out to prove to him that it was just another waste of time.  I convinced him to try it with me and off we went… to an open-level vinyasa class.

Stepping into the classroom, you could immediately feel some sort of something in the air.  Everyone was in silence for a couple of minutes to themselves, when suddenly, the instructor hit a gong and everyone went into a loud expression of “ommmmmmm.”  Confused,  I quickly nudged my husband and gave him a what-in-the-world-is-this-place look.  I couldn’t help but press my lips together to not laugh and started to look around the room.  Everyone was so calm, focusing on their breath, and in the moment.  And I?  I was waiting for someone to come out and tell me that I was on a secret hidden camera TV show.

The instructor was nice and helpful.  She made us do all sorts of handstands (that I obviously couldn’t do) and then some crazy twisting (that I didn’t even know was humanly possible).  Throughout the class, however, I grew very impatient and kept looking at the clock every 15 minutes.  I kept tapping my foot and thought about everything under the sun:  what we were going to have for dinner, if the drugstore was open so I could buy a lip balm, if it was 5 or 6 urgent meetings that I had to schedule the next day at work, why my husband was able to do a handstand and I wasn’t, and what the groundhog did 364 days out of the year.  I just wasn’t into it.  I wanted to walk out and continue with life.

Surprisingly, I stayed until the end, but I left that class and never went back.  I dismissed yoga as too ‘hippie’ and not my style.  I didn’t have the time to take out 90 minutes of my life at least once a week and be ‘patient’ and ‘breathe’.  I had things to do and people to see.  Life was moving fast and my mind was moving faster.  I couldn’t stop.  I wasn’t going to stop.

Summer came around and that’s when the anxiety attack happened.  I didn’t know why that was happening to me.  I didn’t know what I did wrong to deserve it.  I did, though, sit and think for a few weeks and finally realized that I had to take things easier.  I had to slow down and relax.

It wasn’t until October of 2013 that I looked at my husband and told him that I thought yoga would help me.  So, I looked up the different types of yoga and educated myself.  I learned that there was one kind that was more meditative and less strenuous on the body, which would help with controlling my breath and reduce stress: Hatha Yoga (which was very different, by the way, than my first vinyasa class).  I found a studio that offered it and in I went.

My experience with yoga for the first two months will be one that I will never forget because it took me yet on another journey.  I had to do something crazy and something that truly scared me:  I had to breathe and relax.  Not only that, but I had to learn how to discipline myself.  All throughout my life, I kept running away from confrontation.  I hated the feeling of being ‘uncomfortable’ and ‘vulnerable’.  I was afraid.  I was afraid of myself.  But I knew.  I knew I had to be brave.

This yoga class is the most basic of basics.  You sit and meditate.  You don’t even sweat.  Truth is, I made myself go twice twice a week and hated it each and every time.  But I knew I had to stick with it.  I had to do this for the monster inside of me.  During my first 2 weeks I felt anxious and so confined, but had to think positive and I overcame it.  The following 2 weeks made me feel angry and made me pity myself, but I overcame it.  The following month I started to be more comfortable with yoga and found myself crying during class.  And that’s when I knew that this was helping me.  There was something about the way I was slightly bending that let air go through my body and into my brain that made me think clearer.  It made whatever was in my subconscious come out and just pour itself out through my eyes in the form of tears.  It was so releasing.  I was so enlightened by this thing.  Who knew that stretching could make you cry?  Who knew that taking time for yourself and really investing in yourself could give you a second chance.  (By the way, crying during a yoga class is normal, it happens).

Around December 2013, I fell in love with myself.  Because I started to accept myself.  I took the time to do something uncomfortable and gained my sanity.  I also fell in love with yoga.  I started to take 90 minutes of my life three to four times a week to be ‘patient’ and ‘breathe’.  It’s now March 2014 and I owe a lot of my reduced stress and confidence to yoga and what the practice has allowed for me to accomplish thus far. 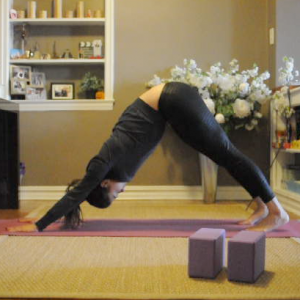 I would recommend to anyone with an ounce of stress, worry or depression to try a week of meditative yoga.  Who knows, maybe it can help you.  It made me realize what is really important in life (my health, sanity, and happiness in my marriage) and that we don’t have to get hung up and go crazy about the little things.  You are a wholesome human being, you have only this life to live.  Make it the way you want it.  Focus on being the best you and do what you care about.  It’s only been 5 months of me going to yoga and I’ve come so far.  I can’t wait to see where I am a year from now!  Actually, I can ;). 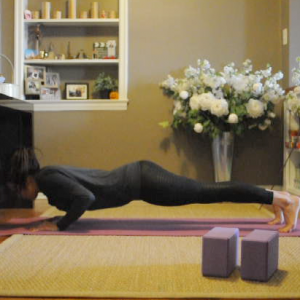 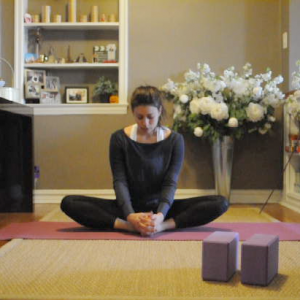 As for the week-long toilet seat argument?  Who cares.  Namaste.

I always make time for my whiteboard

who knew stress management could come down to two paths?