Last night, I made every excuse in the book as to why I couldn’t go to hot yoga: I didn’t have the appropriate clothes, I didn’t have a towel, I only had three dollars in quarters to rent a towel, I had a headache, and I was hungry.  Yes, I was making excuses as to why I couldn’t go to my second-ever hot yoga class.  You’d think that something scary happened at my first-ever hot yoga class that affected me or something.  Well, yes, actually.  That kind of was the case.

About a week ago, my lovely cousin Julia asked if I wanted to go to a hot yoga class.  I told her that I had never been to one before and, truth be told, I was afraid.  But, I knew that the day had to come when I finally faced one of my biggest fears.  So I agreed to go with her and off we went. (Side note: I almost passed out because of the last summer’s heat wave during my giant panic attack.  It scared me so much that I became afraid of the heat)

Before we entered the room at the yoga studio, the receptionist stressed that, no matter what, I could not leave the 110˚F room, not even if I felt dizzy or wanted to leave.  Wow, no pressure, huh?  Nevertheless, I was already there and felt that I was ready to accept the challenge.  As we entered the room, I could immediately feel the heat.  All the memories of my attack came back into my mind: the dehydration, the stress, the mental fogginess – ah!  However, I kept telling myself “Loren, you were brave enough to come into this room, you are brave enough to stay and not run away.”  And that’s exactly what I did.  As the class commenced and continued on for about an hour, I stayed.  I was actually amazed at myself for doing all of the poses and breathing on point.  I was in the moment.  I was keeping up with others in the class.  I was so happy!

And then it came.

During the last part of the class, I started to feel locked in.  I knew I couldn’t leave the room (rules are rules).  And I was hot.  So much, that the heat was starting to get to me and I, mindlessly, was letting it get to my mind.  Shockingly enough, though, I kept going.  Until I couldn’t go anymore.  I couldn’t leave, so what did I do?  I started to cry.  Yes, for the last 20 minutes of class I was crying my eyes out. I was so uncomfortable.  Sure, I had a bad experience in the past and while I tried to burry it, it just came back from the deep subconscious and taunted me.  But that was life showing itself to me.

Then I started to think.  I thought of the fear I had as a ‘monster’ under my ‘bed’.  Believing that this ‘monster’ existed, avoiding it, and fearing it, only made it bigger, meaner, and scarier.  But all of that happened in my mind.  Interchangeably, the ‘monster’ in that yoga class (and in my life) was the heat.  I was tired of running away.  I was tired of this ‘monster’.  So I made the executive decision to finally face the ‘monster’ and looked under my ‘bed’.  I continued to move along with the class to the best of my ability and took charge of my thoughts.  And you know what?  I made it until the end of class, still crying, but I was done.  As I was ready to get up, though, I realized that I seemed to have shocked my body, because at the end of the class, my toes and fingers were frozen.  They lost their blood and oxygen!  It was the same thing that happened to them the same day I got my giant panic attack.  Yes, it seemed that towards the end of the class, my body went through its own little anxiety attack.  But surprisingly enough, my mind was unaffected.  It was stable.  And in all honesty, my mind was just wondering why my body was getting all worked up.  I wasn’t afraid.  I wasn’t in a panic mode.  I was calm!  But just to be sure, I stayed on my back, rested on the yoga mat, and got hydrated.  My fingers finally moved and I could finally feel my toes. And I went on with life. Honestly, still a bit scared that this could happen again (it’s not a comfortable feeling!). But last night, I proved that I could do it again.

While I was making all the excuses in the book to avoid going to another hot yoga class after the first, my mind got strong on me and made me walk into that yoga studio.  Yes, I was afraid of my body going into a ‘shock’ again, but I faced that second ‘monster’ and both my mind and body were OK!  I did cry at last night’s class.  But this time, it was at the very end of class and they were tears of joy and accomplishment.

Life is hard and there are many ‘monsters’ that come and hide under our ‘beds’.  They come out of the blue and can affect us in a negative way.  They can make us beat ourselves up and think that there will never be a way to get over it.  But as I am experiencing it, I am seeing that there is a way to get over it and you will find a second chance, happiness or something else over that hurdle!  The uncomfortable is just that: uncomfortable.  But try to be uncomfortable little by little and you’ll see that you, too, will start to become comfortable.  You will become brave.  You will have an ease of mind, heart, and soul.  You are brave.  And I will go to another hot yoga class! 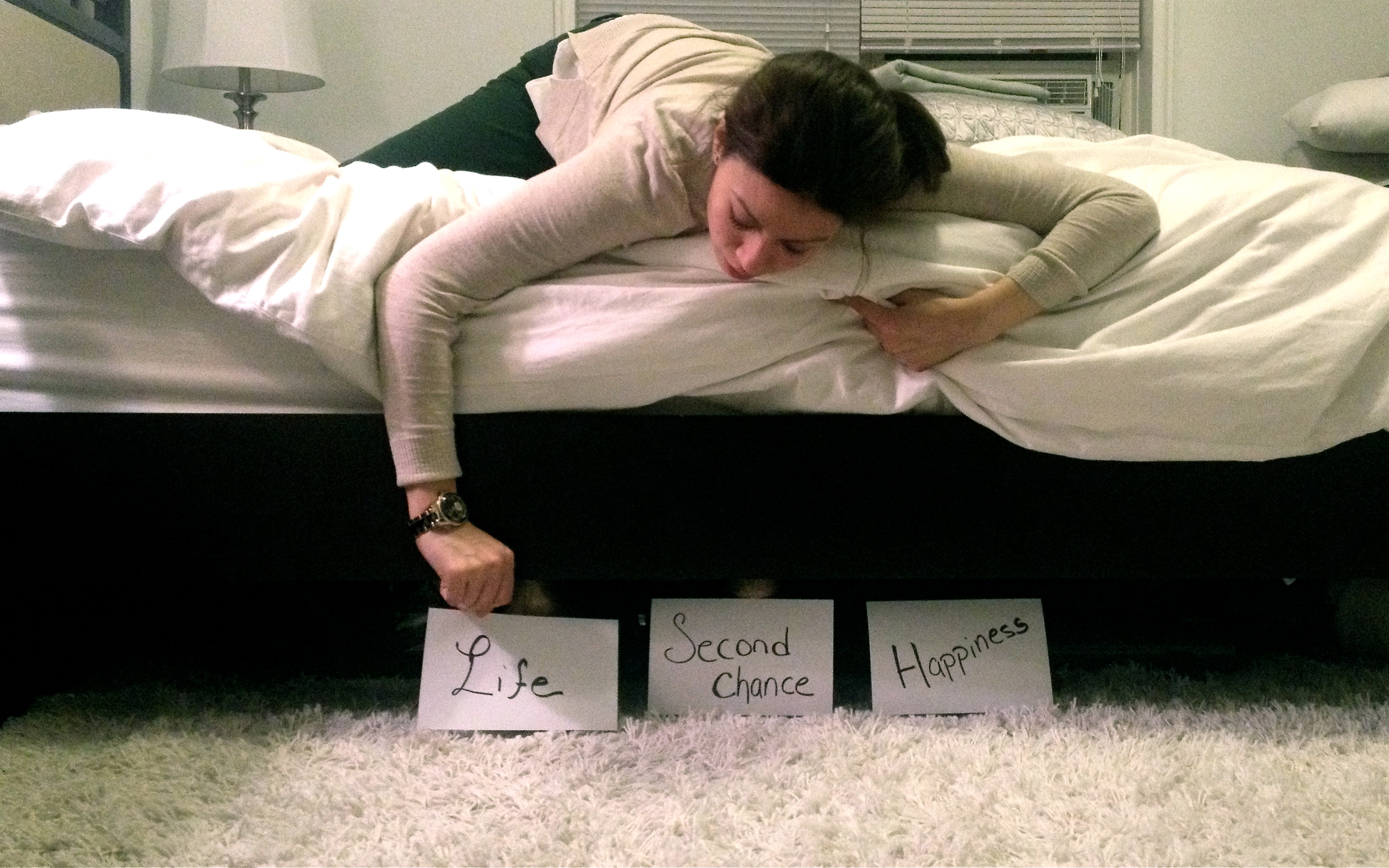 I faced a monster under my bed and found a few things.  What will you find?

hit the reset button with your little something

unsubscribe from anxiety and subscribe to peace of mind