Looking into the mirror these days, I honestly don’t know who the girl on the other side is anymore! 🙂 I would have never believed it if someone told me that I was to run an official race – and finish while at it. Sure, I’ve always had the intention of running. The idea sounded good. The gear looked cool. But I never really did it.

Don’t get me wrong, in my lifetime there have been instances were I would put my sneakers on and go out for a ‘run,’ but the reason was solely so I could feel better about the giant bag of chips and dip I had inhaled while watching T.V. (ah, mindless eating). After fifteen minutes of running, I could no longer do it. I would always talk myself out of it and tell myself that I was a wimp, that I was uncomfortable, that running wasn’t going to get me ‘skinny,’ and that I would never have a reason to wear those cool neon sneakers. Crazy, huh? I had to be skinny. I had to have the latest chips and dip out there. Those were all things that the media was telling me. Those were the reasons why I ran. But no one ever told me that I had to put myself first and feel good. No one ever told me that I should have a healthy mind. No wonder I would hate running; it would remind me of all the things that weren’t true to me. Nothing made sense. And it made it me hate the biggest thing of them all: myself.

I want to share with you what my thoughts and struggles were while running on Sunday, mile by mile. Because it wasn’t just a ‘perfect’ run:

Mile 1: At the start of the race, I was excited and nervous at the same time. I had been waiting for this day and it finally arrived. Smiling here, jumping there, I was a total kid! Being surrounded by so many amazing people who were also running was so motivational. I was so focused on my being. I was living in the present. And at the end of the first mile, I clapped and yelled out a loud “WOO-HOO!” I was in the zone and anxiety wasn’t even a thought!

Mile 2: It was here that I started to notice myself slowing down and realized that I was running on elevations. Ah! Elevations! I didn’t train on any! (I usually avoided them because they were uncomfortable and didn’t think I needed to run on them- serves me right to assume). So I started to reprimand myself and bring myself down. This negative way of thinking made me notice all of the people running with me again. Only this time, I was noticing that they were faster than me. I was starting to compare myself (red flag number one), which then proceeded with a pain on my left torso (red flag number two). At that point, my body was asking me to take a break. So I listened to it and took a thirty-second walk. It did help to catch my breath, but I started to get comfortable walking (this wasn’t a walk-a-thon!). I quickly searched for a motivational song on my phone and had to remind myself that I was not a quitter and that I was, indeed, brave (I was in this race, officially, after all! This wasn’t an accident!). So I got back into it and off I went running again.

Mile 3: As I was running, I started to think about how that short break may have affected my time and how maybe I was going to be seen as a ‘failure’ and a ‘slow poke’ in the eyes of others. It was here that I started to contemplate walking the rest of the mile and convince myself that no one would notice me. Yes, I was giving up. I stopped running and began to walk for thirty more seconds. I gave up. But then it hit me. Someone was noticing me. Me. And at that moment, it all seemed to have clicked. I was focusing on the wrong things since mile two. Just like running to burn calories from the chips and dip, at that moment I was running to be ‘better’ than everyone else. I wasn’t focusing on the real reason why I was doing this. I wasn’t focusing on all of the obstacles and accomplishments that I overcame to get here, mentally. But I had to focus. I had to focus and remember that I was doing this to be healthy. To be brave. To have a better life. I did train for this race. I have been training through yoga. For the past few months I’ve brought balance to my body, strength to my mind, and an openness to my soul. I wasn’t worried about the thousands of people running around me, nor how I felt claustrophobic. No, I felt free. And so, my healthy legs and heart reached my mind and told it to run. They told it to finish. They told it that I was beautiful and that I was going to finish. So I picked up the pace and kept running to that finish line.

Up to mile 4: Ah, I was so tired! But you know what? I thought about how strong I became throughout the first three miles that it gave me that extra push I needed to continue going and finish this thing! I didn’t train on elevations, but I conquered them. I didn’t run as fast as the others, but the mentality, I conquered it. And so, as I made that last left turn and headed towards the finish life, I let out a whimper, got chocked up, and shed a few tears. I was done. I crossed the finish line. I MADE IT!! 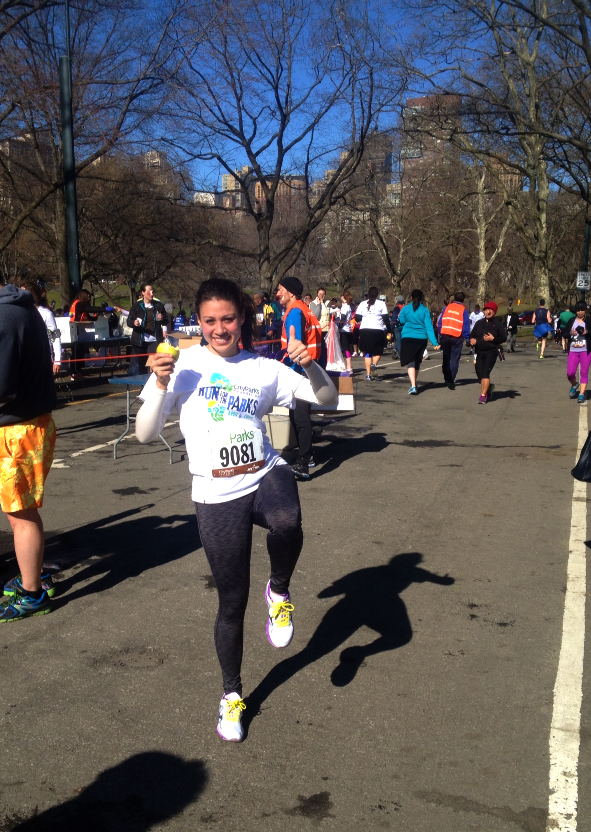 For many years, I had been running for the wrong reasons. And today, today I learned to run for all the right ones.

The road trip that made me sob– happily.

Anxiety & Eating: How they go hand in hand (part: I)